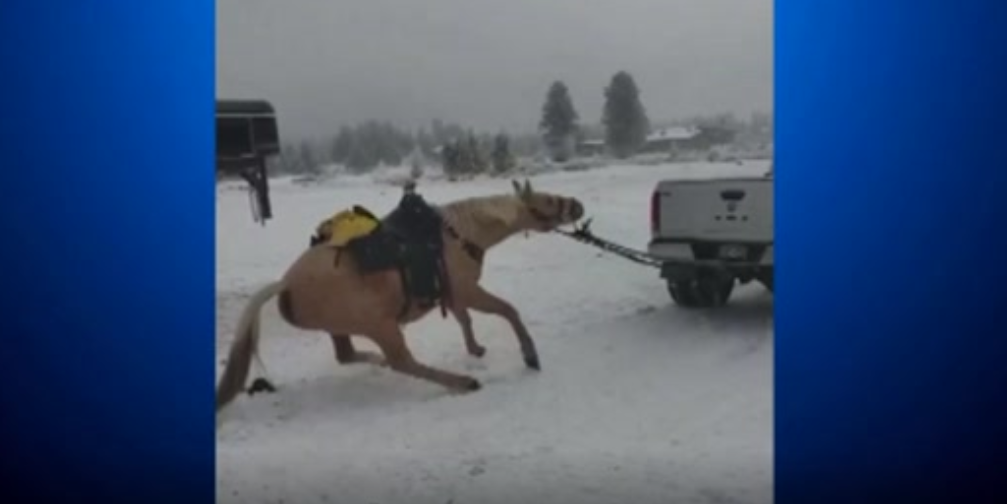 A video that shows a horse in Grand County, Colorado, being pulled from behind a pickup truck has led to a sheriff’s office animal abuse investigation, CBS affiliate KCNC-TV reports. The disturbing video was posted on Facebook Sunday, where it sparked outrage across the country.

Numerous people contacted the Grand County Sheriff’s Office about the video, prompting the investigation. The horse, named Trigger, was then seized by authorities and taken to a veterinary hospital for evaluation by animal welfare officers. The couple’s two other horses have not been seized.

The woman who owns Trigger along with her partner agreed to be interviewed by KCNC off-camera from her home in Grand County on Monday, but did not want to be identified. Sounding distraught, she told reporter Matt Kroschel she knows the treatment was wrong: “I’ve lost my job over this, I’ve upset a lot of people. I made our horse go through something that he shouldn’t have. I was wrong.”

The video shows the horse being pulled for at least 100 yards on a snowy road as the animal resists.

“I’m very sorry. I get why people are upset,” Trigger’s owner told Kroschel. “I was so stupid, I don’t know why we did it.”

“Cases involving kids and animals are obviously very emotional,” said Grand County Sheriff Brett Schroetlin. “We need to do our part of the investigation which sometimes takes a little bit longer than what the community is hoping.”

On Monday, President Trump signed the Preventing Animal Cruelty and Torture Act, or PACT Act, into law, making animal cruelty a federal crime for the first time. Violators of the PACT Act now face criminal penalties of a fine, a prison term of up to seven years, or both.

Every state already has laws on the books that prohibit animal cruelty, but animal welfare activists say a federal law will make it easier to prosecute animal cruelty cases that span different states or jurisdictions.